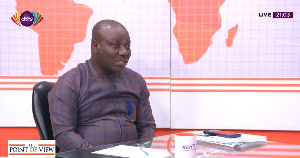 A member of the Finance Committee in Parliament, Isaac Adongo is questioning the capacity of the Consolidated Bank Ghana (CBG) to serve as receiver for banks whose licenses were revoked by the Central Bank in August 2018.

He alleges that the establishment of CBG is what has deepened the woes of the financial sector because of what he feels are the improper valuation of assets and liabilities of the defunct banks.

Speaking on the Point of View on Citi TV, Mr. Adongo who doubles as the Member of Parliament for Bolgatanga Central said the mode of operation of CBG now and its claims of paying depositors is an ‘illegal grand scheme’.

“To be very honest, Consolidated Bank Ghana is all that is wrong with the banking sector in Ghana. It is a very bad example of banking in Ghana. If you have a bank with total assets of GHS8 billion but its loan portfolio is about GHS 34 million is that a bank? If you look at the statement of affairs of CBG, it tells you that the banks that were all taken over, they selected some assets and liabilities and put them together and then issued a bond to cover the gap.

That statement of affairs points to depositor funds of GHS 5.6 million. If they say 95 percent of depositors have been paid, you realize that the money is still sitting at CBG. CBG was given bonds and they can’t pay.”

He further argued that:

“If someone puts his money in a bank, and that bank collapses, he or she is entitled to a receivership process that treats that bank separately, sells the assets, realize revenue and pay back people’s money. So when you have nine banks with different financial standings, and everybody is taking the same amount of money, then you are robbing Peter to pay Paul. That is not receivership, that is illegality. What it means is that they are using banks with financial resources to support customers of banks that do not have financial resources.

The argument of them having debts, is self created. Because you cannot have a situation where CBG will say that, out of the GHS10 billion, they cannot even find 5 billion good loans on the loan and to manage it as a bank. So where is the money and who is managing it?”

The Bank of Ghana earlier in August 2018 revoked the licenses of five struggling banks and merged them into one and named it Consolidated Bank Ghana Limited.

Heritage Bank and Premium Bank were added in January 2019.

CBG was established to salvage depositors’ funds and to manage the aftermath of the banking sector shake-up.

The Central Bank explained that some of the affected banks obtained their licenses using dubious means and had non-existent capital adding that whereas some breached cash reserve requirement, others had their shareholders engaging in supposed dubious transactions.

This was on the back of prudent management practices, the bank has explained.

Management of CBG said they had succeeded in turning around the fortunes of the company and moved into profitability.

Its 2019 second-quarter results show a profit after tax of GHC41.1 million, representing about 280% improvement on performance over the 2018 financial results.

The second-quarter performance also indicates that Net Interest Income was up by about 83 per cent from about GH?122 million at the end of 2018 to GH?223.8 million in the second quarter of 2019.

Total assets of the bank went up from GHC7.5 billion to GHC8.3 billion, representing a growth of 11 per cent.

Having stabilised the finances within such a short period, the bank appears to have turned its attention to growth through a number of marketing activation programmes nationwide.

Managing Director of CBG, Daniel Wilson Addo said in an interview that the bank was poised to be the preferred bank in Ghana.

He said the quick turnaround is a testimony of the strong desire to excel, coupled with a solid workforce.