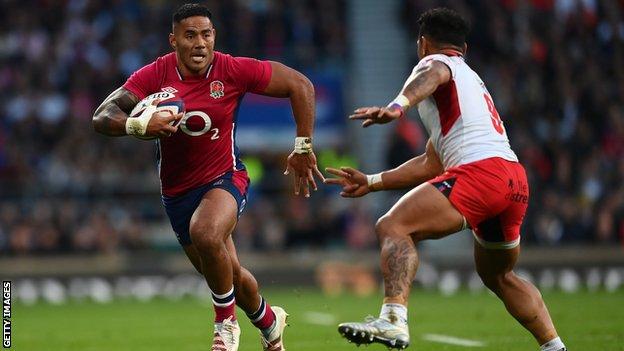 England head coach Eddie Jones may have “made life easier for Australia” by selecting Manu Tuilagi on the wing for Saturday’s Twickenham encounter, says Matt Dawson.

Centre Tuilagi has only started on the wing once in 44 England caps.

The move makes way for Owen Farrell to start at 12 alongside fly-half Marcus Smith, with Henry Slade at 13.

Dawson said Tuilagi is “world-class in midfield” and selecting him in the back three “does not make any sense”.

Adam Radwan, who opened the scoring in the 69-3 thrashing of Tonga last weekend, drops out of the matchday squad to make room for Tuilagi, with Jones only naming two backs on the bench.

Fans may at least be buoyed by the revelation that Tuilagi recently recorded his fastest speed ever on the pitch after a fat loss programme that has increased his muscle mass.

Nevertheless, Dawson was unsure the Sale back was best used on the wing, adding on BBC Radio 5 Live: “I’m sure there are lots of reasons why [he’s been picked there] that we will never know about, but it slightly concerns me that we have made life easier for Australia with that selection.”

Smith has been ‘running the show’ – Farrell

Despite his misgivings, Dawson said “the focus should be on the positive selection of Marcus Smith and him having this opportunity”.

The 22-year-old scored a try in an impressive showing off the bench against Tonga but will now face his sternest test in an England shirt.

Smith’s previous two starts for his country came against the United States and Canada in July and this autumn Jones appears to have backed him as England’s future 10, leaving the experienced George Ford out of his squad altogether.

A minor leg injury halted the Harlequins back’s progress before the Tonga game but captain Farrell says he has been “running the show in terms of attack” this week.

“He’s obviously been playing unbelievably well and he’s come in here and put his stamp on it,” Farrell added.

“It’s been good working together in camp. To build up a bit more of a relationship over the past few weeks has been good – now we’re looking forward to putting it out there on the field.”

Some have questioned whether the inclusion of Smith may now mean Farrell is surplus to requirements after lacklustre performances in England’s disappointing 2021 Six Nations campaign.

But former Australia coach Michael Cheika suggested the 30-year-old had an unseen and important influence on those around him.

“Some players make other players play better,” Cheika said. “I would say Owen Farrell is that type of guy.

“As the level goes up in international rugby, the time reduces. [Farrell’s selection] will just give Smith that bit of extra room if he has someone who can take that play-making off him every now and then.”

England’s winning streak ‘not some type of spell’ – Cheika

England’s preparations have once again been hit by coronavirus disruption, with loose-head props Joe Marler and Ellis Genge both ruled out because of positive tests.

The latest cases come a week after Farrell was forced to withdraw from the Tonga Test because of a result that turned out to be a false positive.

No further cases were reported following the latest round of PCR testing, the Rugby Football Union said on Saturday morning.

Uncapped Sale prop Bevan Rodd steps up to the starting XV, with Newcastle’s Trevor Davison on the bench, and there will be an unfamiliar face in Australia’s front row too.

London Irish prop Ollie Hoskins is set for a debut off the bench after the Wallabies relaxed a rule that meant overseas-based players had to have at least 60 Test caps and sevens seasons in Super Rugby to represent their country.

As a result, Racing 92’s Kurtley Beale returns at full-back, while La Rochelle lock Will Skelton is on the bench.

Australia have not beaten England during Jones’ reign as head coach – a run of seven matches – but under Dave Rennie won five games a row this year before losing to Scotland last Sunday.

Cheika said the Wallabies’ run of defeats against England was “not some type of spell”, adding: “We just haven’t been good enough.

“Australia have had to play too much catch up through the goal-kicking of Farrell that has edged them [England] ahead.

“On Saturday, if Australia can get out and make England play some catch up that’s the scenario that would most likely lead to ending the run that England have had.”