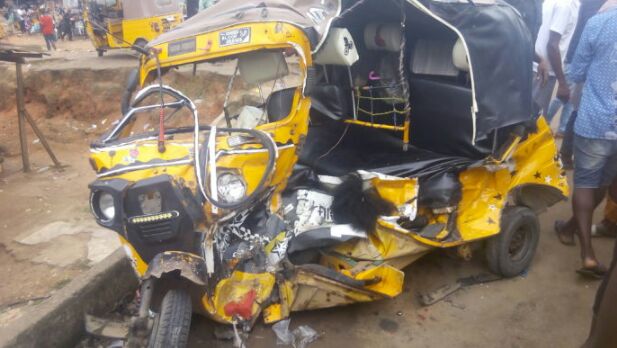 A tricycle rider with two passengers on board has been crushed to death after colliding with a Toyota Rav4 at Ejisuman infront of the secondary school off Abankuro Road.

The suspect driver name withheld driving Toyota RAV4 vehicle from kumasi to Ejisuman collided with a Motor Tricycle ridden by one Muslim guy now deceased after the rider collided with the Toyota Rav4.

The Rider sustained serious injury as a result died on the spot.

The body of the deceased has been deposited in the morgue awaiting autopsy.

The accident vehicle and the tricycle have been impounded by Police.

Sradio5.com has gathered that there were two motor riders on the road of which the two were challenging themselves and also carelessly speeding upon reaching a heap collided with the Toyota RAV4.