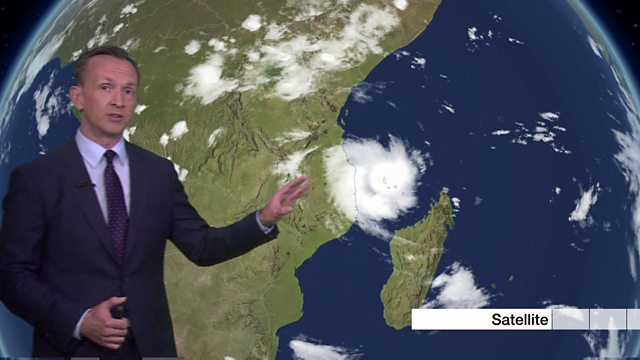 Residents in Tanzania and Mozambique are bracing for the touchdown of Cyclone Kenneth – which is barrelling towards land with winds of 205km/h (125mph) and torrential rain.

Communities in the southern Tanzanian region of Mtwara and in northern Mozambique are being warned to seek higher ground and shelter.

UN officials say they fear it could mean a “humanitarian catastrophe”.

More than 900 people died when the storm brought devastation to Mozambique, Malawi and Zimbabwe.

At least three million people were left in need of humanitarian assistance.

The latest system is expected to hit further north than Idai, forecaster say.

Kenneth, an intense tropical cyclone, is expected to make landfall on the north coast of Mozambique on Thursday evening.

Forecasters warn it is likely to be slow-moving, meaning heavy rain is expected to fall on the area for several days.

Flights have already been cancelled and schools closed as Mozambique braces for the storm to hit.

Its violent winds and rains hit the island nation of Comoros overnight. Authorities there say the storm killed at least three people as it swept through.

The International Federation of Red Cross and Red Crescent Societies shared images of the damage on social media.

In a tweet, the group confirmed it had volunteers on the ground assisting communities.

Late on Wednesday, the head of the UN Office for Disaster Risk Reduction said she feared the region faced “another humanitarian catastrophe”.

Mami Mizutori shared an image which showed the large storm system on Twitter, warning it was already comparable in intensity to Cyclone Idai.

The storm is expected bring 1m (3.2ft) of rain to some areas of Mozambique – with storm surges expected of 3-5m in places.

Despite Zimbabwe being further inland, officials there say they are still putting their disaster management agencies on alert.