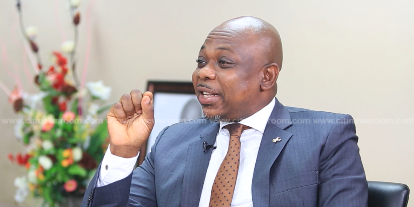 The Ranking Member on the Defence and Interior Committee of Parliament, James Agalga, has urged the Inspector General of Police, Dr. George Akuffo Dampare to stay within his limit in the discharge of his duties.

His comments come on the heels of the attempted arrest of the Member of Parliament (MP) for the Madina constituency, Francis-Xavier Sosu.

Some protestors blocked roads, burnt tyres and allegedly destroyed some properties during a protest organised by the Madina MP.

Police have insisted that these amounted to criminal activity and have tried to invite the MP to assist with investigations.

Mr. Sosu said some police officers tried to arrest him during the protest.

Police were also reported to have tried to arrest Mr. Sosu while he was at Church on Sunday, October 31, 2021, though the police administration has denied the reports.

The Speaker of Parliament subsequently refused a request from police to release Mr. Sosu citing Article 117 of the constitution which says that “civil or criminal processes coming from any court or place out of Parliament shall not be served on, or executed in relations to, the Speaker or a member of the Clerk to Parliament while he is on his way to, attending at or returning from, any proceedings of parliament”.

The police service has however not ruled out legal action to compel the Madina MP to report himself for questioning.

Director of Public Affairs of the Ghana Police Service, ACP Kwesi Ofori, in a Citi News interview, indicated that the police could seek interpretationinto the extent of parliamentary privileges afforded legislators.

Speaking on Face to Face on Citi TV, Mr. Agalga advised the Police Service not to be “over-zealous.”

“This is his first gaffe. He is being over-zealous. The IGP needs to understand that the democratic dispensation does not allow the police to also act above the law, just as we are being told that MPs are not above the law. He should remember that the service owes its existence to the 1992 constitution.”

“He needs to be mindful about the clear provisions of Article 122 and 117. It is not for nothing that the framers of the constitution made room for these provisions. If it is the collective view of Ghanaians that these provisions have outlived their usefulness, then let’s take them out of the constitution. But until then, I expect everyone, including the President, to respect this provision. Even if they intend seeking for interpretation of the provision, that has not been done yet, and so the police should just stick with the Speaker’s position and stop the back and forth.”