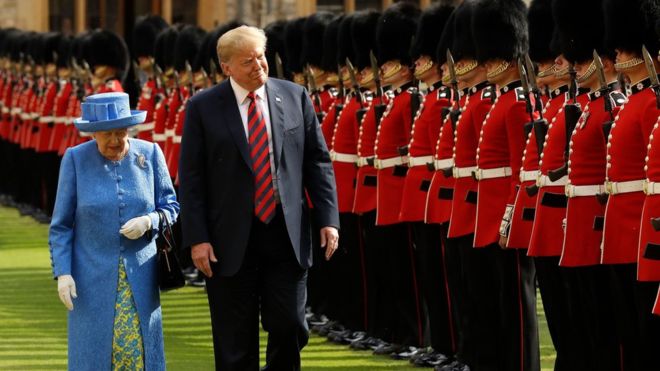 US President Donald Trump will make a three-day state visit to the UK from 3 to 5 June, Buckingham Palace has announced.

The president and First Lady Melania Trump will be guests of the Queen and attend a ceremony in Portsmouth to mark 75 years since the D-Day landings.

He will also have official talks with the prime minister at Downing Street.

Mr Trump previously met the Queen at Windsor Castle when he came to the UK in July 2018 on a working visit.

The White House said the upcoming trip would reaffirm the “steadfast and special relationship between the United States and the United Kingdom”.

The president was promised a state visit by Prime Minister Theresa May after he was elected in 2016 – but no date was set.

Mrs May said June’s state visit was an “opportunity to strengthen our already close relationship in areas such as trade, investment, security and defence, and to discuss how we can build on these ties in the years ahead”.

But shadow foreign secretary Emily Thornberry voiced concerns about the visit, saying: “It beggars belief that on the very same day Donald Trump is threatening to veto a United Nations resolution against the use of rape as a weapon of war, Theresa May is pressing ahead with her plans to honour him with a state visit to the UK.”

Representatives of other countries invited to the Portsmouth event on 5 June include those from Canada, France, Germany, Australia, New Zealand, Belgium, Luxembourg, Poland, Norway, Denmark, Netherlands, Greece, Slovakia and the Czech Republic.

Portsmouth was one of the key embarkation points for many of the landing craft on D-Day, when, during World War Two, Allied forces invaded Nazi-occupied France marking the beginning of the end for Adolf Hitler’s domination of Europe.

The June gathering on Southsea Common will involve live performances, military displays and tributes to the Allied troops who fought in Normandy, including at least 11 Royal Navy vessels in the Solent and a flypast of 26 RAF aircraft.

After leaving the UK, Mr Trump and his wife will travel to France for a series of D-Day anniversary events on 6 June itself.

The president’s last visit to the UK – when he had talks with Mrs May at Chequers before heading to Scotland, where he owns the Turnberry golf course – was marked by demonstrations.

In London, thousands of people took to the streets to voice their concerns.

And in Scotland, people showed their displeasure, both in Edinburgh and at Turnberry.

It said 10,000 officers from across the country were needed to cover the occasion.

The campaigners behind the 2018 protests – the Stop Trump coalition and Stand Up To Trump – have vowed to mobilise “huge numbers” once again in response to the visit.

A spokeswoman for Commons Speaker John Bercow said a request for Mr Trump to address Parliament – an event often associated with a state visit – would be “considered in the usual way”, but did not say whether a request had yet been received.

Mr Bercow – who, as Speaker, has the power to veto who addresses Parliament – previously said he would be “strongly opposed” to Mr Trump addressing the Houses of Parliament during a state visit.