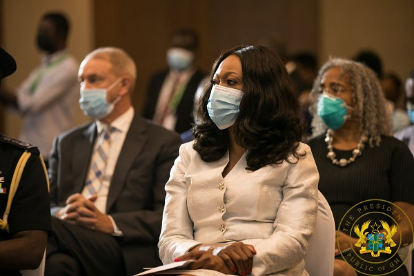 The Electoral Commission (EC) has dismissed reports making rounds that its Chairperson, Jean Mensa, was present at the New Patriotic Party national annual delegates conference held in Kumasi over the weekend.

The electoral management body in a statement issued on Monday December 20, 2021 urged the public to disregard the said image of Jean Mensa seated amongst some NPP members.

“Our attention has been drawn to a photograph making the rounds on social media purporting to be the Chairperson of the Electoral Commission, Mrs Jean Mensa, at the recently held NPP’s Delegate Conference in Kumasi. This comes to inform the general public to disregard this false news item as the said photograph is not Mrs. Jean Mensa,” the statement read.

It further cautioned members of the general public to be weary of individuals who have made it their sole objective to bring the name of the Chairperson of the EC into disrepute.

We entreat the public to be mindful of the schemes of sections within our society whose sole mission is to try to tarnish the image and reputation of the Chairperson of the electoral Commission,” the statement concluded.

The NPP on Sunday December 19, 2021 held its annual delegates conference where some party stalwarts as well as well-wishers graced the occasion at Heroes Park in Kumasi.

The event was hosted under the theme ‘NPP: Our Resolve, Our Determination and Commitment to Ghana’s Development’ and graced by party stalwarts.

A total of over 8,000 delegates turned up in their numbers to consider over 91 proposals submitted to amend the party’s constitution, however that could not eventually happen.

The party deferred the proposal to amend certain portions of its constitution which was the main itinerary on the day to the party’s national council.

Key amongst the proposals which sharply divided opinions was the proposal to elect the flagbearer of the party 2 clear years ahead of the general elections in 2024.

Read below the full statement from the Electoral Commission