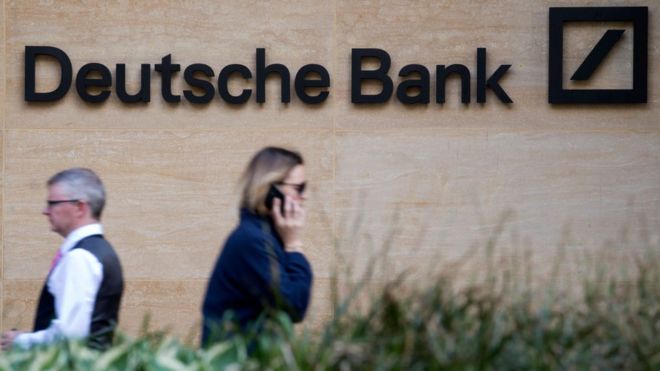 Deutsche Bank and Commerzbank have abandoned merger talks, saying the deal would have been too risky.

Both banks said the deal would not have generated “sufficient benefits” to offset the costs of the deal.

The German government had been supporting the tie-up, with reports saying Finance Minister Olaf Sholz wanted a national champion in the banking industry.

The government still owns a 15.5% stake in Commerzbank, acquired after the bank was bailed out following the financial crisis.

The deal was seen as a way of reviving the fortunes of both banks.

Combined, the banks would have controlled one fifth of Germany’s High Street banking business with €1.8 trillion ($2tn; £1.6tn) of assets, such as loans and investments.

However, in a statement Deutsche Bank said managing the merger would have created additional risks and costs, which would have not been offset by the potential benefits.

“Deutsche Bank will continue to review all alternatives to improve long-term profitability and shareholder returns,” it said.

Commerzbank chief executive Martin Zielke said it had “made sense” to consider the deal, but like Deutsche Bank it concluded that the potential benefits did not justify the extra costs and risk.

Deutsche Bank has been struggling to generate growth and has been hampered by losses at its US investment banking operations.

Commerzbank has also found it difficult to grow.

Both banks are facing an economic slowdown in Germany and in the eurozone.

Critics of the tie-up said that combining two struggling banks would have just created one large bank with problems.

In addition, the deal faced opposition from unions who feared that more than 10,000 jobs would be cut.

Deutsche Bank’s multiple efforts to reorganise its business have “stalled” according to analysts at investment bank Keefe, Bruyette & Woods.

It said the bank was facing a poor economic environment, rising costs for funding and “disillusioned clients and employees”.

“Unlike peers, Deutsche Bank does not have the luxury to fall back on large, profitable parts of its business to help offset struggles elsewhere,” their report said.

The analysts said that Deutsche Bank should make further cuts to its international operations.

To help dispel the gloom, Deutsche Bank released a preview of its first quarter results, which are due on Friday.

It will report a net income of €200m (£173m), which was more than analysts had been expecting.

Last year, the bank reported its first annual profit since 2014.

The eurozone banking industry is in a “fragile state”, according to Sascha Steffen, Professor of Finance at Frankfurt School of Finance and Management.

He argues that efforts to rebuild banks’ balance sheets after the financial crisis have been “insufficient” and banks remain “vastly under-capitalised”.

As a result, he expects mergers among banks from different European countries, and that could include Commerzbank and Deutsche Bank.