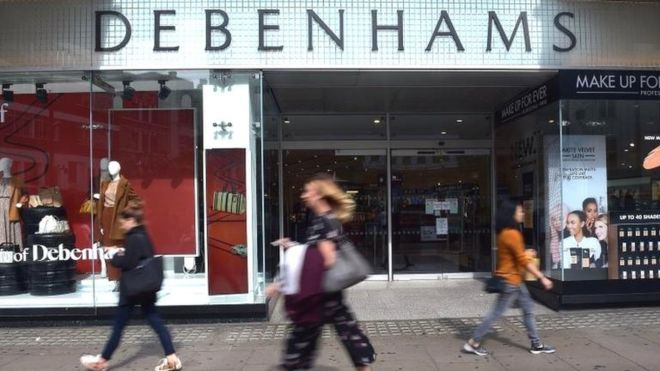 Debenhams is on the brink of administration after it rejected a new offer from Sports Direct, made in the early hours of Tuesday, to pump £200m into the department store.

Its shares were then suspended before Tuesday’s trading, at its own request.

Debenhams is likely to go into pre-pack administration, under which shops would continue trading but the business would come under the control of its lenders.

On Monday, it rejected a £150m offer from Mike Ashley’s company.

The overnight offer was turned down because Mr Ashley wanted to be chief executive.

It would have seen Sports Direct underwrite the raising of £200m by issuing new shares, higher than its previous proposal.

A pre-pack administration lets a company sell itself, or its assets, as a going concern, without affecting the operation of the business. Administrators take over the running of the business to protect creditors and shareholders lose their investments.

If Debenhams does use a pre-pack administration, Mr Ashley’s near 30% stake in the company, which cost about £150m to build up, would be wiped out.

While the shops would continue trading for now, Debenhams has proposed closing around 50 branches from next year and renegotiating rents with landlords to tackle its funding problems.

Debenhams has been struggling for a while and issued three profit warnings last year. It also has a debt pile of £640m.

Towards the end of 2018, the chain announced it was increasing its store closure plans from 10 to 50 over a three to five-year period.

The company said it was not ready to release a list of which shops may be affected.

In February, it was revealed that the shutting of 20 of those stores could be brought forward if the retailer took out a company voluntary arrangement (CVA), a form of insolvency that can enable firms to seek rent cuts and close unwanted stores.

Laith Khalaf, senior analyst at Hargreaves Lansdown, said that Tuesday was set to “mark the endgame for control of the department store” and that the rejection of Sports Direct’s overnight bid “suggests that Debenhams simply isn’t interested in what Sports Direct has to offer”.

He added: “It looks like Mike Ashley has one final card to play, and that’s making a firm takeover offer for Debenhams. Even that seems unlikely to shift the retailer from the course it’s currently on, as it sounds like the department store is preparing to enter administration imminently.”