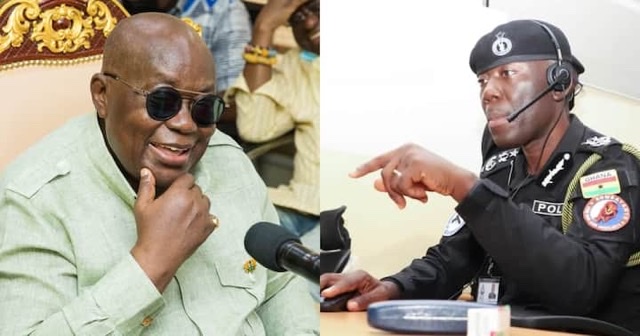 President Nana Addo Dankwa Akufo-Addo is expected to swear in COP Dr. George Akuffo Dampare as the substantive IGP today Friday, October 8, 2021. According to a report filed by 3News.com, the president will seal by ending Dampare’s acting role as the Inspector General of police.

The president’s confirmation of Dampare will come as a joy to a lot of Ghanaians who are well pleased with his work since he took over the position on August 1, 2021.

Sradio5.com earlier reported that President Akufo-Addo has announced that he would soon confirm the acting Inspector General of Police(IGP), George Akuffo Dampare fully.

In a report filed by 3news.com, the president said he has so far vindicated his decision to appoint him as the acting IGP after James Oppong Boanuh. Akufo-Addo seems pleased with the performance of Dampare in his acting position.

“He has so far vindicated my decision to appoint him,” President Akufo-Addo said. Dampare appointed when as IGP On August 1, Dr. Greorge Akuffo Dampare begun to serve as the acting after he was appointed on Wednesday, July 21, 2021. 51-year-old Dr. Akuffo Dampare became Ghana’s 30th IGP and the youngest acting IGP to be appointed in the Fourth Republic and the eighth youngest since Ghana gained independence. Prior to his new appointment, he was a Commissioner of Police (COP) and the senior-most police officer (in terms of ranking) after the just retired IGP, having served in the service for 31 years.

The short-term Dampare-led police administration has received a lot of admiration from Ghanaians following the swift and timely manner they respond to crime cases and the release of information across all the social media platforms. Under Dampare, some key reshuffling has taken place some units of the service established to enhance community policing.