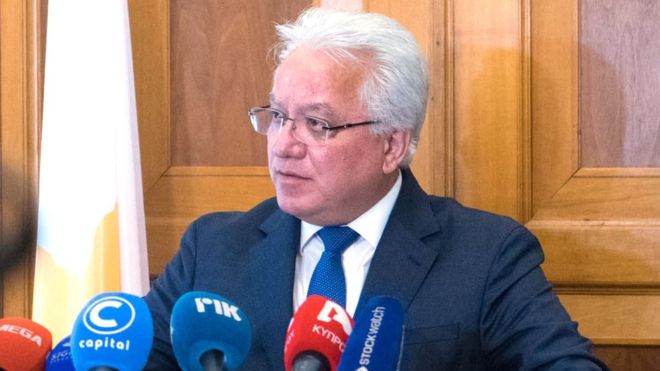 Cyprus’s justice minister has resigned after a man admitted killing seven migrant women and girls, in a case that went undetected for nearly three years.

Ionas Nicolaou said he was leaving his post for reasons of “political responsibility”, adding that he wasn’t personally involved in the case.

A 35-year-old Greek-Cypriot army officer is in custody.

Officials are accused of not properly investigating missing persons reports because the victims were migrants.

Announcing his decision, Mr Nicolaou called for the country’s police complaints commission to hold an independent inquiry into the lack of an initial investigation.

“I have never shown any disrespect, but I have demonstrated the need for an independent investigation that will indicate any gaps in procedures,” he told reporters.

President Nicos Anastasiades said he had accepted Mr Nicolaou’s resignation, adding that he had been “deprived of the services of one of my closest associates”.

Protesters earlier called on the justice minister and the police chief to resign, accusing officials of negligence and racism.

How did murders come to light?

Also among the victims were a woman of South Asian descent, a Romanian woman named locally as Livia Bunea, her young daughter Elena and Ms Tiburcio’s daughter, Sierra, aged 6.

Several of the women were reported missing when they first disappeared, but the killings only came to light when the bodies of Ms Tiburcio and Ms Lozano were found in the past three weeks.

A German tourist had been taking photographs of a disused mine to the west of Nicosia, when heavy rain flooded a shaft and brought one of the bodies to the surface.