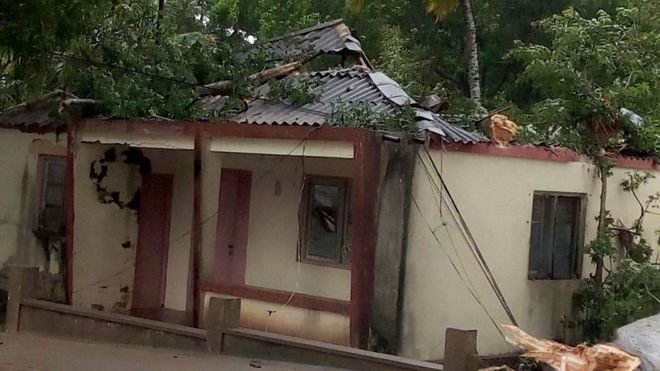 Cyclone Kenneth has made landfall in northern Mozambique, a country still recovering from another huge storm.

The cyclone has brought 220km/h (140mph) winds and has already killed three people on the island nation of Comoros.

Mozambique’s National Institute of Disaster Management (INGC) said 30,000 people had been evacuated from areas likely to be hit.

More than 900 people died when the storm brought devastation to Mozambique, Malawi and Zimbabwe.

At least three million people were left in need of humanitarian assistance.

Kenneth made landfall on Mozambique’s northern province of Cabo Delgado on Thursday evening, with wind speeds equivalent to a Category 4 hurricane.

Early reports say power is out in parts of the main city in the area, Pemba, and in most areas to the north of the city. Some houses have collapsed.

But communications with the affected areas have been disrupted so the true picture of the extent of the damage is not yet clear.

A “compulsory evacuation” of families is under way and will continue “until we have all people in secure ground”, INGC spokesman Paulo Tomas said.

More than 680,000 people are said to be at risk from the cyclone, Mozambican officials said. Flights have already been cancelled and schools closed.

Forecasters warn it is likely to be slow-moving, meaning heavy rain is expected to fall on the area for several days. The UN says over 600mm (23.6 inches) of rain may come – nearly double the 10-day accumulated rainfall that caused flooding in the port city of Beira, further south, during Cyclone Idai.

Forecasters at Meteo-France warned that Kenneth could trigger waves up to five metres (16 feet) higher than usual off the country’s north-eastern shores.

“I was quite preoccupied by the sea… the wind was very strong, and I’ve never seen anything like it in my 15 years in Pemba,” a Portuguese owner of a lodge on Wimby beach, Anabela Moreira, told AFP.

The UN’s World Food Programme said it was working on an “emergency preparedness plan” with the Mozambican government and other humanitarian groups.

Cabo Delgado province is not as densely populated as the area hit by Cyclone Idai, and there is apparently more higher ground there.

That, in addition to warnings by authorities ahead of the storm, could mean we see less loss of life.

However, the area has been hit by Islamist violence in recent months, which is likely to complicate humanitarian operations.

Thousands of people had already fled their homes to seek shelter in camps for displaced people.

What about other countries in the region?

Comoros is still reeling from damage caused by the cyclone, which battered the islands with high winds and heavy rains. The winds have caused widespread power outages and damage to homes.

In some southern areas of neighbouring Tanzania, authorities have ordered schools and businesses to close.

Residents in the southern Tanzanian town of Mtwara were earlier told to seek higher ground and shelter, but that warning has been stood down.

The path of the cyclone has shifted meaning a major catastrophe is no longer expected, regional commissioner Gelasius Byakanwa told reporters.

“That has informed [our decision] to allow the residents to go back home and carry on with their daily activities.” he said.

The International Federation of Red Cross and Red Crescent Societies shared images of the damage on social media.

In a tweet, the group confirmed it had volunteers on the ground assisting communities.