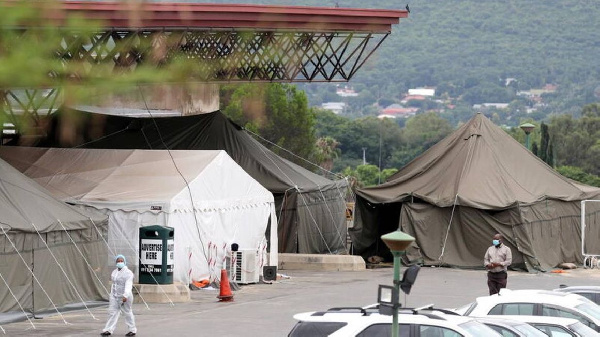 Steve Biko Hospital in Pretoria is so full that workers are providing oxygen to some patients in beds wheeled out into the parking lot, as regular cases of Covid-19 in South Africa exceed 20,000, surpassing levels seen during the first wave of the pandemic.

Hospitals are full of capacity in coronavirus hotspots across Africa’s most developed country, facing a shortage of beds, declining oxygen supplies, and a scarcity of intensive care units.

On Monday, a Reuters cameraman visited the Steve Biko Academic Hospital in the capital city, operated by the government, and saw a patient getting oxygen on the tarmac outside the emergency department entrance.

Nearby, to cater for more arrivals, hospital workers sprayed beds with sanitizer.
The hospital has erected huge tents where, before being moved to designated wards, some patients receive emergency care.

South Africa had reported more than 1.2 million infections as of Sunday night, the most in Africa, and more than 33,000 fatalities. Last week, infections exceeded 21,000 a day, a new record, propelled by a version of the virus called 501Y.V2 that is thought to be more infectious.

The chief executive of Steve Biko told state broadcaster SABC that treating patients outside was inevitable due to a sudden patient surge.

The condition can alter at any time for Covid-19 patients, including one that looks stable when he steps through the door. In terms of our inner power,
it was overflowing,’ said Mathabo Mathebula.