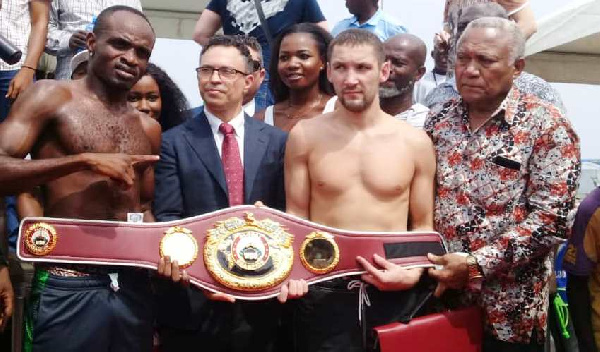 World champion Richard Oblitey Commey has thrown his weight behind former world champion Emmanuel ‘Gameboy’ Tagoe ahead of his bout against Vyacheslav Gusev at the Bukom Boxing Arena on February 23.

Commey, who recently won the IBF lightweight crown after defeating Isa Chaniev of Russia, walked to the platform on Friday during the mandatory weigh-in for Tagoe and Gusev to offer his support to his compatriot.

After hugging and uttering words of encouragement to Tagoe, the IBF champion descended and said he would be at the ringside on Saturday to support Tagoe to win the vacant titles.

Commey told the media they [Tagoe and himself] were one people and that there was no bad blood between them. He expressed the belief that Tagoe would win the fight against his Russian opponent.

“He is a great fighter, he will win and he will also become a world champion,” Commey noted.

Tagoe, 30, was originally billed to fight Gusev on January 26 at the Bukom Boxing Arena but the bout was rescheduled following a right-hand fracture sustained by the Ghanaian in the days leading to the fight.

A native of Prokopyevsk in Russia, Gusev has 30 professional fights under his belt, with five losses, but faces an experienced Ghanaian boxer for a chance to grab a world title shot.