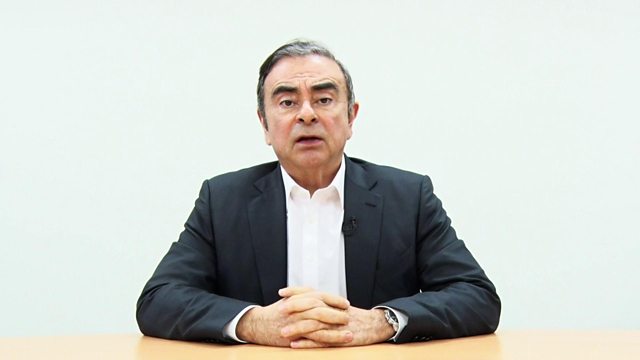 Nissan ex-boss Carlos Ghosn has accused former executives at the firm of “backstabbing” and says he is innocent of all charges against him.

In a pre-recorded video released by his legal team, he said he was victim of a “conspiracy” and wanted a fair trial.

Nissan said in response that there was “substantial evidence” against him.

Mr Ghosn was arrested for a fourth time last week while on bail awaiting trial on charges of financial misconduct and breach of trust.

“Aside from any criminal matters, Nissan’s internal investigation has uncovered substantial evidence of blatantly unethical conduct,” the company said.

Carlos Ghosn is trying to seize the initiative.

The man who was once one of the most powerful figures in the global motor industry has suffered months of indignities and humiliations. Now he seems determined to tell his side of the story – even though he is in prison once again.

His argument is simple. The charges against him are false and he has been the victim of a conspiracy orchestrated by managers at Nissan, who were afraid of losing their influence within the Alliance – the global carmaking group that also includes Renault and Mitsubishi.

But – and it’s a big but – he hasn’t offered much here to back up his defence. Just a bald statement that he’s innocent of the charges.

Nissan is having none of it. The company insists it has evidence of “blatantly unethical conduct” by Mr Ghosn and says further material is still emerging.

Which brings us to another aspect of his statement: his plea for a “fair trial”. Something he suggests his lawyers aren’t very confident about.

That looks like a comment designed to cause maximum embarrassment in Japan, already squirming under the harsh international spotlight cast upon it by Mr Ghosn’s arrest and detention.

In the video message, the 65-year-old, who was first arrested in November, maintained his denial of any wrongdoing or misconduct.

“There was a fear that the next step of the alliance… would in a certain way threaten some people or eventually threaten the autonomy of Nissan.”

Mr Ghosn was the architect of the alliance between Nissan and French carmaker Renault, and brought Mitsubishi on board in 2016.

The fall from grace for the industry titan has attracted global attention. It has also put a spotlight on fighting within the carmaker alliance and on Japan’s legal system.

His wife Carole Ghosn has flown to France to ask the government there to intervene on her husband’s behalf.

What has happened so far?

They allege that $5m of that amount was used by Mr Ghosn for personal expenditure.

Local media had previously said that authorities had been building a new case against him involving payments to a dealership in Oman.

He had been released on bail in March after being in prison for more than three months.

Mr Ghosn was first detained in November, charged with under-reporting his pay package for the five years to 2015.

In January, a fresh charge claimed he understated his compensation for another three years. He was also indicted on a new, more serious charge of breach of trust.

He is credited with turning around the fortunes of Nissan and Renault over several years.