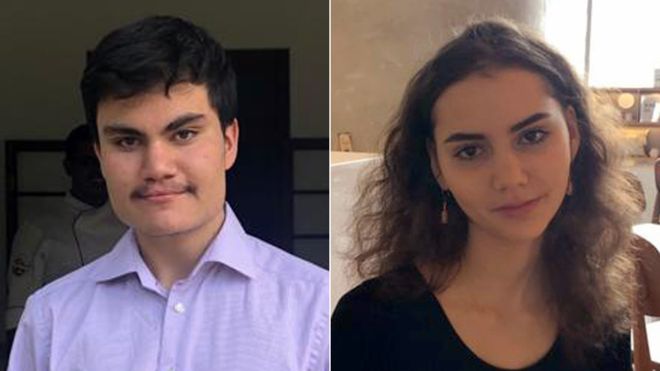 Tributes are being paid to members of three British families who were among more than 300 people killed in Easter Sunday’s bombings in Sri Lanka.

The deaths of siblings Daniel and Amelie Linsey have “shocked” their schools, staff said.

Eight Britons died in the attacks. A former colleague of Dr Sally Bradley, of Manchester, said she and her partner Bill Harrop had been “soulmates”.

And father Ben Nicholson spoke of his “wonderful” wife and two children.

The death toll from the wave of attacks on churches and hotels in the Sri Lankan capital Colombo, Negombo and Batticaloa has now risen to 321, with about 500 injured, police say.

A state of emergency is in place to prevent further attacks.

The UK’s Foreign Office has updated its travel advice for Sri Lanka.

It warns tourists to avoid crowded public areas, plan any movements carefully and not to travel during the newly-implemented nationwide curfew.

Among the eight Britons killed were Anita Nicholson and her children Annabel, 11, and Alex, 14.

The Nicholsons had been visiting the country on holiday from their home in Singapore.

Ben Nicholson, who survived the blast, said his family were killed as they ate breakfast in the Shangri-La Hotel in Colombo.

“Mercifully all three of them died instantly and with no pain or suffering,” said Mr Nicholson, who is a partner with law firm Kennedys.

He paid tribute to his “wonderful, perfect wife”, a lawyer for mining firm Anglo American.

She was “a brilliant, loving and inspirational mother to our two wonderful children”, he said.

“Alex and Annabel were the most amazing, intelligent, talented and thoughtful children, and Anita and I were immensely proud of them both and looking forward to seeing them develop into adulthood,” he added.

“They shared with their mother the priceless ability to light up any room they entered and bring joy to the lives of all they came into contact with.”

Mr Harrop, who was also in Sri Lanka on holiday, had been in the fire service for 30 years before retiring in 2012, said Assistant County Fire Officer Dave Keelan, of Greater Manchester Fire and Rescue Service.

“He was a much loved and respected colleague and friend. He will be greatly missed.”

His partner, Dr Bradley, who moved to Western Australia in 2012, was the director of clinical services at Rockingham Peel Group in Perth.

“They (Dr Bradley and Mr Harrop) were soulmates, they just lived for each other.

“He had two boys, which Sally took on as her step-sons. She talked about them as if they were her own.”

The team from North Manchester General Hospital, where Sally had previously worked, said: “Sally was a lovely, kind individual, extremely approachable and gave so much to the NHS in Manchester during her career.”

It is not currently known which explosion killed the couple.

Godolphin and Latymer School in west London said it was “obviously devastated and shocked” by news of the death of Amelie Linsey.

And Westminster Kingsway College, where Daniel had gone to study business, said it was “saddened” to hear of his “tragic death”.