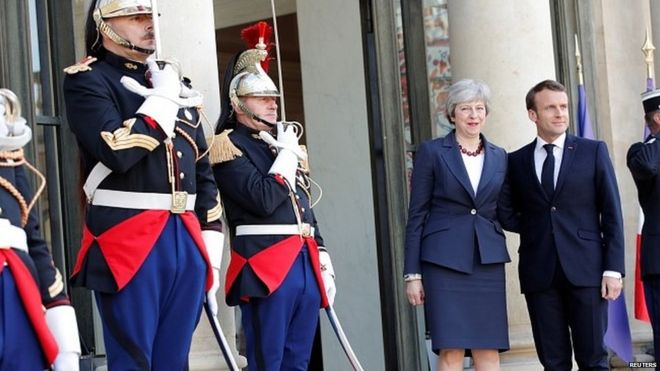 Theresa May is holding last-minute Brexit talks with the French President Emmanuel Macron, with the UK due to leave the EU in three days’ time.

The UK PM will urge Mr Macron to back her request to delay Brexit again until 30 June, having earlier met German Chancellor Angela Merkel in Berlin.

After the talks, Ms Merkel said a delay that runs to the end of the year or the start of 2020 was a possibility.

There is a summit on Wednesday when all EU states will vote on an extension.

Cross-party talks in Westminster aimed at breaking the impasse in Parliament finished, with both sides expressing hope there would be progress.

A draft EU document circulated to diplomats ahead of the emergency meeting of EU leaders proposes an extension but leaves the date blank.

The BBC’s Brussels correspondent Adam Fleming said the document refers to an extension lasting “only as long as is necessary and, in any event, no longer than XX.XX.XXXX and ending earlier if the Withdrawal Agreement is ratified”.

European Council president Donald Tusk said there was “little reason to believe” that the ratification process of the withdrawal agreement could be completed by the end of June.

In a letter to EU leaders, he said at Wednesday’s summit members should discuss “an alternative, longer extension” that will be flexible and “would last only as long as necessary and no longer than one year”.

Downing Street said Mrs May and Ms Merkel discussed the UK’s request for an extension of Article 50 – the process by which the UK leaves the EU – to 30 June, with the option to bring this forward if a deal is ratified earlier.

The prime minister and Chancellor Merkel agreed “on the importance of ensuring Britain’s orderly withdrawal”, a statement said.

Following a meeting of the EU’s General Affairs Council in Luxembourg, diplomats said “slightly more than a handful” of member states spoke in favour of a delay to 30 June and a majority were in favour of a longer extension.

Adam Fleming said no maximum end extension date was agreed, although December 2019 and March 2020 were mentioned.

Conditions of a delay were discussed including UK participation in May’s European Parliament elections, no re-opening of the withdrawal agreement and how to guarantee the UK’s pledge of “sincere co-operation” in ongoing EU business.

So far, MPs have rejected the withdrawal agreement Mrs May reached with other European leaders last year.

One of most contentious parts of the plan is the Irish backstop – an insurance policy that aims to prevent a hard border returning to the island of Ireland.

The EU has continually said it will not re-open the withdrawal agreement for negotiations, but Leader of the Commons Andrea Leadsom renewed her plea for them to look again.

Meanwhile, Environment Secretary Michael Gove said cross-party talks aimed at breaking the impasse in Parliament had been “open and constructive”, but the two sides differed on a “number of areas”.

Labour’s shadow business secretary Rebecca Long Bailey said they were “hopeful progress will be made” and discussions with the government will continue in the “coming days”.

Further talks are due to be held on Thursday.

In a leaked letter seen by the Telegraph, International Trade Secretary Liam Fox has warned that agreeing with Labour over its demand for a customs union is the “worst of both worlds” and will leave Britain unable to set its own trade policy.

On Tuesday afternoon, MPs approved a government motion asking MPs to approve the PM’s request to the EU to delay Brexit, required after a bill from Labour’s Yvette Cooper became law.

The final decision on an extension lies with the EU – and the leaders of all the 27 other EU countries have to decide whether to grant or reject an extension.

If the UK is still a member of the EU on 23 May, it will have to take part in European Parliamentary elections.

Luxembourg’s Foreign Minister Jean Asselborn said the UK would “certainly not” leave without a deal on Friday.

But Ireland’s Deputy Prime Minister Simon Coveney said a no-deal Brexit was still possible – even though it would represent “an extraordinary failure of politics”.

EU chief negotiator Michel Barnier said the EU has “hope and expectation” from the cross-party talks happening in Westminster and he would be willing to “improve” the political declaration “within hours”.