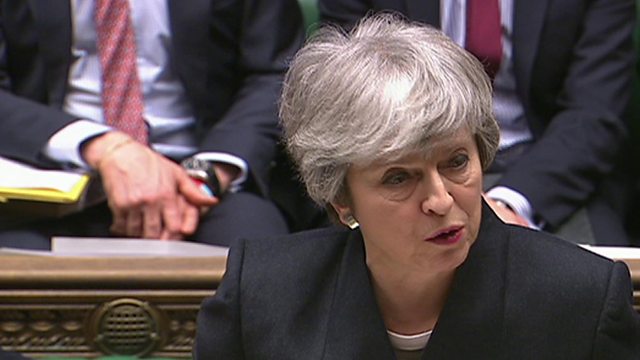 Theresa May has told MPs it remains her “priority” to deliver Brexit, defending the decision to delay the UK’s exit from the EU by more than six months.

The new deadline of 31 October, set following late-night talks in Brussels, means the UK is likely to have to hold European Parliament elections in May.

The prime minister promised to pursue an “orderly” Brexit, adding that the “whole country” was “frustrated”.

Brexit was originally set to happen on 29 March. But after MPs repeatedly rejected Mrs May’s withdrawal agreement with the EU, the deadline was put back to 12 April.

The new 31 October deadline averts the prospect of the UK having to leave the EU without a deal this Friday.

But, under EU rules, the UK will have to hold European Parliament elections in May, or face leaving on 1 June without a deal.

In a statement to the House of Commons, Mrs May said she “profoundly” regretted her deal not being agreed to by MPs.

She said: “The whole country is intensely frustrated that this process of leaving the European Union has not been completed.”

On the latest delay, she said: “The choices we face are stark and the timetable is clear. I believe we must now press on at pace with our efforts to reach a consensus on a deal that is in the national interest.”

Mrs May also told MPs that backing her deal would mean there was no need for European Parliament elections.

The government is continuing to hold talks with Labour aimed at achieving a consensus on how to break the deadlock in Parliament.

Mrs May said: “Reaching an agreement will not be easy, because to be successful it will require both sides to make compromises.

“But however challenging it may be politically, I profoundly believe that in this unique situation where the House is deadlocked, it is incumbent on both front benches to seek to work together to deliver what the British people voted for.”

In response, Mr Corbyn said: “The second extension in the space of a fortnight represents not only a diplomatic failure but is another milestone in the government’s mishandling of the entire Brexit process.”

He added: “The prime minister has stuck rigidly to a flawed plan and now the clock has run down, leaving Britain in limbo and adding to the deep uncertainty of business, workers and people all across this country.”

Mr Corbyn said cross-party talks were “serious, detailed and ongoing”, but warned that the government would “have to compromise”.

If no agreement was possible, he said: “We believe all options should remain on the table, including the option of a public vote.”