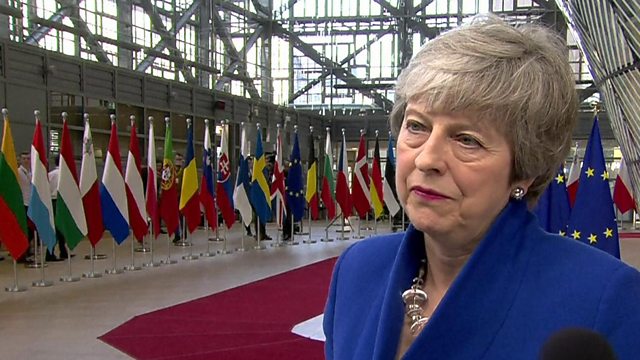 Theresa May says she has “been clear” with the EU that she is only seeking a short delay to Brexit.

Mrs May wants to postpone the UK’s exit date beyond this Friday until 30 June – but EU leaders are expected to offer a longer delay, with conditions.

Arriving at a summit in Brussels, the PM said she “greatly regrets” that the UK has not already left.

Mrs May is about to address the other 27 EU leaders to make her request for an extension.

The PM will then leave the meeting and the leaders will discuss her proposal over dinner.

Ahead of the summit, European Council President Donald Tusk said that “neither side should be allowed to feel humiliated”, and urged the other 27 leaders to back a flexible extension of up to a year.

Mrs May said that the UK could leave the EU when a deal is ratified by Parliament, and so the exit date could be by 22 May.

Earlier, Mrs May appeared in the Commons for the weekly question session with opposition leader Jeremy Corbyn at Prime Minister’s Questions.

That head-to-head followed five days of talks between the government and Labour officials aimed at breaking the Brexit impasse.

The 1922 Committee – made up of Tory backbench MPs – will also meet at 17:00, with some members seeking a firm date for Mrs May to step down as leader of the party.

If no extension is granted, the default position would be for the UK to leave on Friday without a deal.

So far, MPs have rejected the withdrawal agreement Mrs May reached with other European leaders last year, but the Commons has also voted against leaving in a no-deal scenario.

Mrs May said she knew many people would be “frustrated that the summit is taking place at all”, but its purpose was “to agree a deal to enable us to leave the EU in that smooth and orderly way”.

She said the “extra time” to get a deal through Parliament was “in everybody’s interest”.

Asked if she would accept a longer extension than her proposal, she said: “I have asked for an extension to 30 June.

“But what is important is that any extension enables us to leave at the point at which we ratify the withdrawal agreement, so we could leave on 22 May and start to build our brighter future.”

The PM has previously said she was “not prepared to delay Brexit any further than 30 June”.