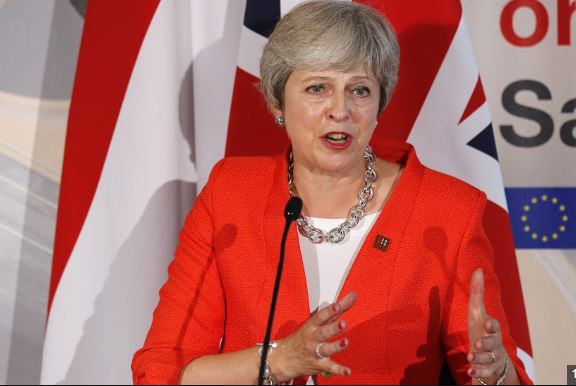 The Brexit vote must not be frustrated and the government needs to maintain an “absolute” focus on delivering it, Theresa May has said.

In a speech to Tory activists the PM said, as her negotiations with the EU reach their final stages, the “worst thing we could do is lose our focus”.

It came as three pro-EU cabinet members warned they could vote to delay Brexit to prevent a “disastrous” no-deal.

But Mrs May said there must be no party “purges” over MPs with differing views.

Ahead of crucial votes in the Commons next week, Greg Clark, Amber Rudd and David Gauke told the Daily Mail they would be prepared to defy the prime minister and vote for a delay.

The intervention led to calls for their resignations by Tory Brexiteers.

The UK remains on course to leave the European Union on 29 March.

However, the government has repeatedly refused to rule out the possibility of the UK leaving without a formal deal, in the event that Mrs May cannot get MPs to approve the deal she negotiated with Brussels in time.

Mrs May’s speech to the National Conservative Convention (NCC) in Oxford on Saturday evening came as MPs prepare for a series of votes on Wednesday which could see Parliament take control of the Brexit process.

Mr Clark, the business secretary, along with Ms Rudd, the work and pensions secretary, and the justice secretary, Mr Gauke, had said they would be prepared to defy Mrs May and vote for a delay to Brexit.

They argued there “simply will not be time to agree a deal and complete all the necessary legislation” unless a deal is approved in the coming days.

An amendment tabled by former Tory minister Sir Oliver Letwin and Labour’s Yvette Cooper would give Parliament the opportunity to delay Brexit and prevent a no-deal situation if there is no agreement with the EU by the middle of March.

However, Mrs May told activists: “Our focus to deliver Brexit must be absolute.

“We must not, and I will not, frustrate what was the largest democratic exercise in this country’s history. In the very final stages of this process, the worst thing we could do is lose our focus.”

Mrs May said there should be no moves to deselect MPs because of their views on Brexit.

Her remarks came after the resignations of three pro-Remain Tory MPs – Anna Soubry, Heidi Allen and Sarah Wollaston – to join a group of Labour defectors in the new Independent Group reduced the Tories working majority in Parliament to eight.

Mrs May said: “No-one gets more frustrated than I do when people vote against the whip, particularly given the tight Parliamentary arithmetic that we face.

“But we are not a party of purges and retribution. We called a referendum and let people express their views – so we should not be seeking to deselect any of our MPs because of their views on Brexit.

“Our party is rightly a broad church – on that and other issues.”

Mrs May is expected to hold talks with European Council president Donald Tusk and other key EU figures in Egypt later during a summit between leaders of EU and Arab league countries.

But Downing Street has played down hopes of a breakthrough on her Brexit deal being reached in Sharm el- Sheikh.

The summit is the first between leaders of EU and Arab league countries and will focus on tackling concerns over security and migration, and boosting trade.