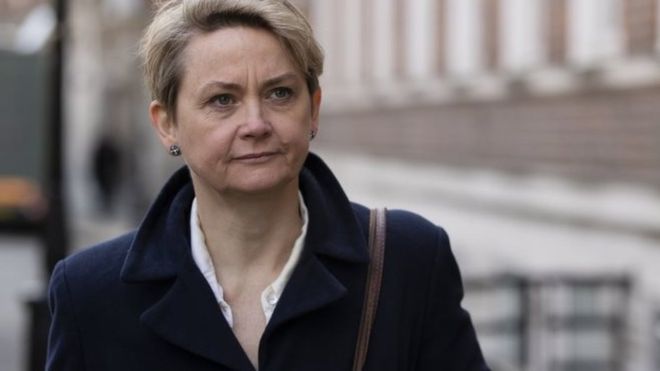 A cross-party group of MPs has put forward a bill to prevent a no-deal Brexit in law.

The bill would require the PM to ask for an extension of Article 50 – which allows the UK to leave the EU – beyond the current exit date of 12 April.

Labour MP Yvette Cooper has presented the bill in the Commons, for debate on Wednesday.

Meanwhile, the EU’s chief negotiator has said a no-deal Brexit is now more likely but can still be avoided.

Michel Barnier said a long extension to the UK’s 12 April exit date had “significant risks for the EU” and a “strong justification would be needed”.

Tory MP Sir Oliver Letwin, who supports Ms Cooper’s bill, said: “This is a last-ditch attempt to prevent our country being exposed to the risks inherent in a no-deal exit.

“We realise this is difficult. But it is definitely worth trying.”

Ms Cooper said the UK was “in a very dangerous situation” and MPs “have a responsibility to make sure we don’t end up with a catastrophic no deal”.

Speaking to BBC Radio 4’s World At One, she added: “We have been attempting to squeeze into just a couple of days a process that really should have been happening for the last two years – a process of trying to build a consensus around the best way forward.

In March, MPs voted against leaving the EU without a deal, but it was not legally-binding.

BBC political editor Laura Kuenssberg said a third set of so-called indicative votes could still take place alongside this process, but the focus of the cross-party group was now approving the bill – with the hope that it will pass on Thursday.

In the latest round of indicative votes on Monday, MPs voted on four alternatives to the PM’s withdrawal deal, but none gained a majority.

MPs rejected a customs union with the EU by three votes. A motion for another referendum got the most votes in favour, but still lost.

The votes were not legally binding, but they had been billed as the moment when Parliament might finally compromise.

Earlier, Mr Barnier said: “No deal was never our desire or intended scenario but the EU 27 is now prepared. It becomes day after day more likely.”

He told the European Parliament’s foreign affairs committee that “things are somewhat hanging on the decisions of the House of Commons”, and that the deal was negotiated with the UK “not against the UK”.

“If we are to avoid a no-deal Brexit, there is only one way forward – they have got to vote on a deal.

“There is only one treaty available – this one,” he said, waving the withdrawal agreement.

Mrs May’s plan for the UK’s departure has been rejected by MPs three times.

Last week, Parliament took control of the process away from the government in order to hold a series of votes designed to find an alternative way forward.

Eight options were put to MPs, but none was able to command a majority, and on Monday night, a whittled-down four were rejected too.