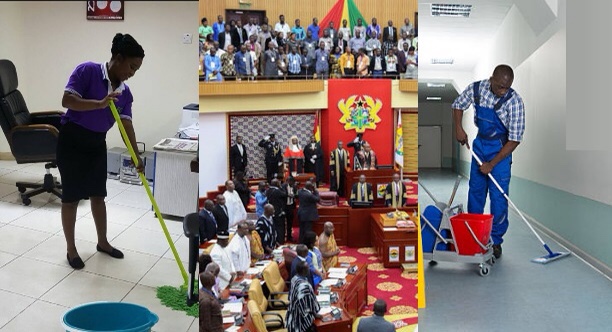 Ibrahim Murtala Mohammed, Member of Parliament for Tamale Central, has revealed the amount of money paid to office cleaners at Parliament on a monthly basis.

Murtala Mohammed, who was attempting to make a comparison between how the 1.75 Electronic Transactions fee will effect such people, claimed that his interactions with cleaners indicated that they earn GH₵400 monthly.

He was concerned that if a relative of one of the cleaners became ill and required GH₵200 in medical care, the cleaner would still have to pay a fee on that amount.

“At Parliament, I met with the cleaners. One of them came to meet our floor the day before yesterday (Thursday, December 16), and I questioned her. How much do you get paid monthly? The lady claimed they get paid GH₵400 every month. The mother of such a lady is sick in the village, and they need GH₵200 to procure her medicine or transport her to the hospital. The lady decides to give GH₵200 to her mother out of the GH₵400 she is paid. “That person can declare she is poor, according to Ursula Owusu’s logic,” he remarked.

He reiterated the minority caucus’ position that the E-levy should be rejected even if the percentage fee is cut to the minimal minimum.

He repeated the minority’s position that the levy should be opposed in “any shape or form” because it will harm Ghanaians.

The appropriation was passed, and now the e-levy is the only thing left to do.” We are adamant that we will not accept e-levy in any shape or form. We’re bringing our numbers together, and the people of this country will know we’re on their side.

“On Monday, we’ll have a full-fledged debate and possibly a vote on it.” He went on to say.