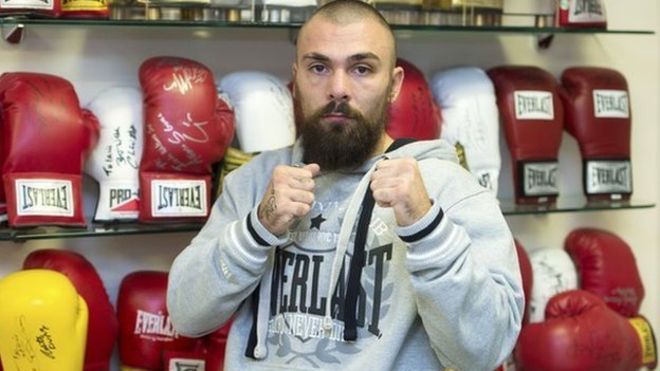 A Dundee boxer died following a fight that “should never have taken place”, a fatal accident inquiry has concluded.

Mike Towell died the day after losing in the fifth round to Welsh fighter Dale Evans in September 2016.

The inquiry said if he had been “open and honest” about a medical condition it was “highly likely” he would not have been allowed to box from 2014.

It said the boxing governing body’s rules were vulnerable to the concealing of relevant information by fighters.

The 25-year-old, known as “Iron Mike” Towell, was diagnosed with severe bleeding and swelling to his brain following the 2016 fight in Glasgow.

He was given medical treatment in the ring before being taken to hospital, but died 24 hours later.

The inquiry was told that Mr Towell had been advised by doctors not to box three years earlier after suspected seizures.

It also heard details of his medical examinations with a qualified doctor appointed by the British Boxing Board of Control (BBBC) in 2014, 2015 and 2016.

The notes showed that Mr Towell had said in the examinations that he had not suffered from headaches, blackouts or fits.

In his written judgement, Sheriff Principal Craig Turnbull said: “Regrettably, it appears that Mr Towell’s love of boxing caused him to ignore the advice of doctors and not to accept the medical condition he had been diagnosed as suffering from.

“It is hard not to conclude that the very drive and commitment to boxing which Mr Towell demonstrated in his ascent to a final eliminator contest for the British welterweight championship in only his thirteenth professional fight is what led to his untimely death.”

The sheriff concluded that the 2016 fight against Mr Evans “should never have taken place”.

He said: “Had Mr Towell been open and honest with the doctors who carried out his annual BBBC medical examinations, it is highly likely that he would not have been licensed to box from at least 2014 onwards.

“Indeed, it is possible, although not certain, that he may never have been licensed to box professionally.”

Sheriff Turnbull said he imagined that Mr Evans, who did not give evidence at the inquiry, would be haunted by the events “for the rest of his life”.

He said: “Whilst I am sure that it will be of little comfort to him, it is important to record that Mr Evans is blameless.”