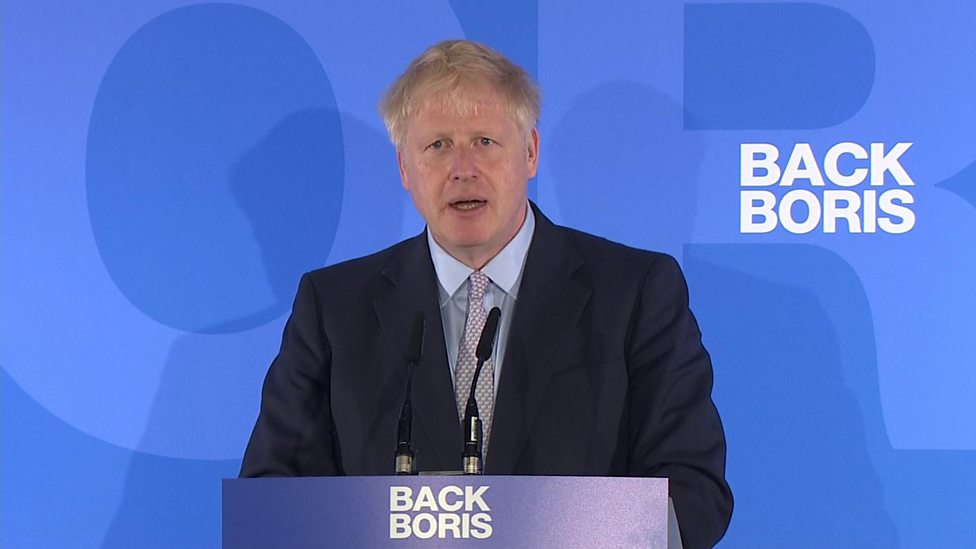 Boris Johnson has said he is “not aiming for a no-deal outcome” for Brexit at the launch of his campaign for the Tory leadership.

But he said leaving no deal on the table was a “vital tool of negotiation” and the UK “must do better than the current withdrawal agreement”.

But Chancellor Philip Hammond said it was “impossible” to leave by then.

“I think it’s not sensible for candidates to box themselves into a corner on this,” Mr Hammond told a Bloomberg conference.

“Parliament will not allow a no-deal exit from the EU, and our experience to date has suggested that it may not be that easy to agree a deal in Parliament.”

In a campaign video released on Tuesday, Mr Javid said he would bring a “fresh look” to the Conservative Party and was capable of healing the divisions caused by Brexit.

Mr Javid has won the backing of Scottish Conservative leader Ruth Davidson, who will introduce him at Wednesday’s event.

Meanwhile, Labour has tabled a cross-party motion to stop a no-deal Brexit being pushed through by a future prime minister.

It plans to force a vote on Wednesday to give MPs control of the timetable on 25 June, so MPs would be able to introduce legislation to avoid a no-deal scenario.

Mr Johnson and Mr Javid are the last of the 10 candidates in the contest to officially launch their campaigns for the job of Conservative Party leader – and prime minister – ahead of Thursday’s first ballot of Tory MPs.

Mr Johnson is regarded as the frontrunner in the contest, with many more endorsements from Tory MPs than any other candidate.

He has kept a low profile in the race to succeed Theresa May so far, his only significant intervention being a pledge – immediately criticised by his rivals – to cut income tax bills for people earning more than £50,000 a year.

At Wednesday’s launch, the former foreign secretary – who quit cabinet over Mrs May’s Brexit policy – said it was “right for our great country to prepare” for a no-deal outcome.

He said any delay to Brexit would “further alienate not just our natural supporters but anyone who believes that politicians should deliver on their promises”.

And he warned his party it would “kick the bucket” if it went into the next election having failed to carry out the mandate given to it by the British people.