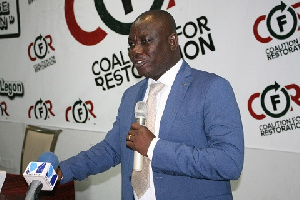 Member of Parliament (MP) for Bolgatanga Central, Isaac Adongo, has accused the Akufo-Addo administration of badly managing the banking sector which has forced them to lay off workers and become brokers of government securities.

The MP is of the opinion that the banks are struggling to stay afloat and are clutching at every straw to survive due to Government’s actions or inactions.

The struggles of businesses he notes, has forced the banks to stop or significantly reduce lending to them but have now become brokers of Government securities which the banks ordinarily would not engage in if the business environment was doing well.

“Due to the struggles of businesses, banks in Ghana have now become brokers of Government securities. They are now sleeping, laying off workers and lending to Akufo-Addo’s broke Government,” he revealed in a tweet sighted by MyNewsGh.com

The vocal critic of Akufo-Addo’s economic management of the country wonders how the Consolidated Bank Ghana Limited (CBG) which has assets worth GH¢8 billion lent only GH¢37 million?

His point, it can be surmised, is that the bank may not be lending out much to businesses because the business ecosystem is not in the best of shape and the bank is wary of incurring non-performing loans.