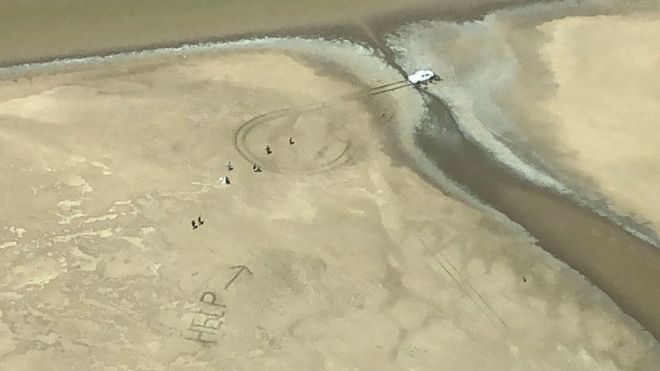 A couple have been rescued from a swamp in northern Australia after writing “help” in the mud to attract attention.

Shantelle Johnson and her partner Colen Nulgit were on a fishing trip in Keep River National Park, Northern Territory when their car became bogged down.

The couple and their puppy, Ace, were forced to spend Sunday night in the vehicle but said they feared the rising tide would bring in crocodiles.

They were later rescued by a search team after being missing for 26 hours.

“We were stuck on the marshland and we were right next to saltwater,” Mr Nulgit told ABC Australia.

“We tried digging and we tried putting stuff under the tires but it didn’t budge,” Ms Johnson told ABC.

“We were pretty scared and worried, but we were just hoping someone would come.”

After sleeping in the van on their first night, they “grabbed everything”, left the car and made camp in marshland nearby.

The two – from Kununurra in Western Australia – said they had little food with them, but had packed a carton of water bottles.

Luckily, the couple had already told their families where they were going, and a search team was sent from Barra Hole after relatives tried, unsuccessfully, to contact them.

Thanks to the mud sign and a fire they lit on the marshes, they were soon spotted by a search plane flying overhead.

“It could have been a different story if they hadn’t done that,” Kununurra police Sergeant Dean Andrzejaczek told ABC.

“I’m just grateful for everyone who pitched in and helped and came out to look for us,” said Mr Nulgit in an interview with CNN.

“We’re pretty lucky surviving and getting out of that.”