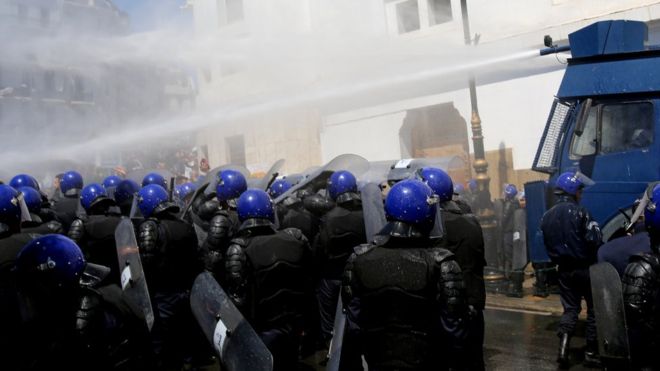 But many want more radical change.

Mr Bensalah, who will be in power until a presidential election, pledged to work in the interests of the people.

“I need everyone during this period in our country to apply the constitution strictly, to work hard, faithfully and with dedication in order to return as soon as possible the word to the people,” he told members of parliament after he was appointed.

As soon as the appointment of Mr Bensalah was announced, protesters took to the streets of the capital, Algiers, demanding “Bensalah go”.

The 77-year-old is seen as being very close to the ailing former president, who had been in power for 20 years.

From the start of the protests in February, the demonstrators have not just been focusing on Mr Bouteflika, Algeria analyst James McDougall told the BBC.

Placards and online posts have been demanding an end to the “system”, or “Le Pouvoir”, meaning that all those around the former president should also go.

The allegation was that Mr Bouteflika was used as a front for a group of businessmen, politicians and military officials, who are said to really run the country.

The protests have been peaceful and the security forces have not used heavy-handed tactics to break them up.