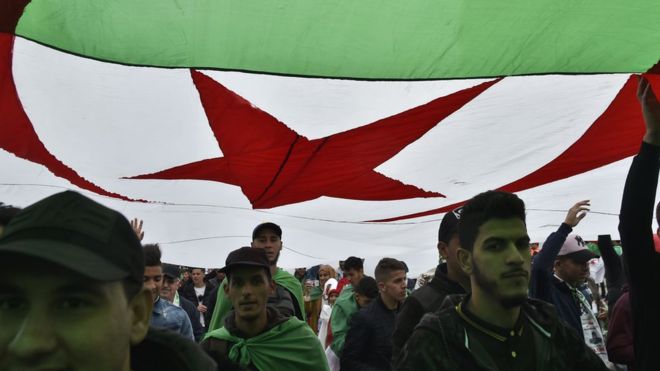 Thousands have taken to the streets of the Algerian capital demanding a complete overhaul of the country’s political structure.

This is the seventh successive week of Friday protests and Tuesday’s resignation of long-serving President Abdelaziz Bouteflika does not appear to have satisfied the demonstrators.

According to the constitution, parliament’s speaker should take over.

But protesters want all those associated with Mr Bouteflika to go.

The president, who had been in power for 20 years, said this week that he was “proud” of his contributions but realised he had “failed in [his] duty”.

He added that he was “leaving the political stage with neither sadness nor fear” for Algeria’s future.

The youth are the main driving force behind these demonstrations, young men and women who have known no president other than Abdelaziz Bouteflika.

But they are not satisfied.

“We are tired of this regime, they have robbed us. We’ve had enough of that,” an emotional young woman tells me.

Nearly half of the population is under 30, many of whom are unemployed and having to live in poor conditions.

But I have also seen Algerians from older generations taking part in the protests.

Everybody here wants a change. They are sending a clear message: “a new phase with new faces”.

They tell me they don’t trust anyone associated with the Bouteflika era.

The mood is full of enthusiasm and energy but the people here take pride in the peaceful nature of the protests.

They have been emboldened by their success in unseating the president and now believe the same can happen with his entourage.

Earlier on Friday, the head of intelligence and close ally of Mr Bouteflika, Athmane Tartag, was reportedly sacked.

The octogenarian leader suffered a stroke six years ago and has rarely been in public since.

Pressure had been building since February, when the first demonstrations were sparked by Mr Bouteflika’s announcement that he would stand for a fifth term in national elections.

The president later withdrew his plans and reshuffled Algeria’s cabinet to quell accusations of corruption and cronyism, but resigned this week as protests continued.