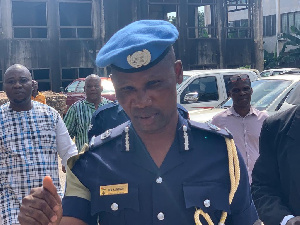 Shortly after his appearance at a Kaneshie Magistrate Court in Accra yesterday over his alleged involvement in a coup plot, ACP/Dr. Benjamin Agordzo hosted a group of media persons and others in a show of dramatised defiance with words like “they cannot break me down. I am as strong as anything.”

Donning his UN regulation blue beret, he started his brief tirade with reference to a WhatsApp chat the contents of which he said was unrelated to the charge levelled against him.

The WhatsApp was a pointer to a group chat, part of a series of exhibits investigators are working in relation to the coup plot.

“…WhatsApp group platform which is unrelated to any alleged coup. Nobody should bog me down. I am as strong as anything. I will stand for this till the end. They cannot break me down. Thank you very much for your support,” those were the words of the suspect as the security operatives who appeared to have allowed him the brief moments to speak to the media whisked him away.

For a man noted for his public space commentaries about the police institution and political issues, the brief moment he had was just enough to go on his usual tangent.

His arrest was said to have occurred shortly after his return from a UN mission hence his appearance in the blue beret and not a Ghana Police Service headgear.

He was remanded by the District Court presided over by Magistrate Eleanor Kakra Barnes Botchway, in connection with the alleged plot to destabilise the country and overthrow the government.

He is alleged to have incited members of a non-governmental organisation, ‘Take Action Ghana’ (TAG), to demonstrate against the New Patriotic Party (NPP) government and subsequently overthrow it as he allegedly said it is within their right to do so.