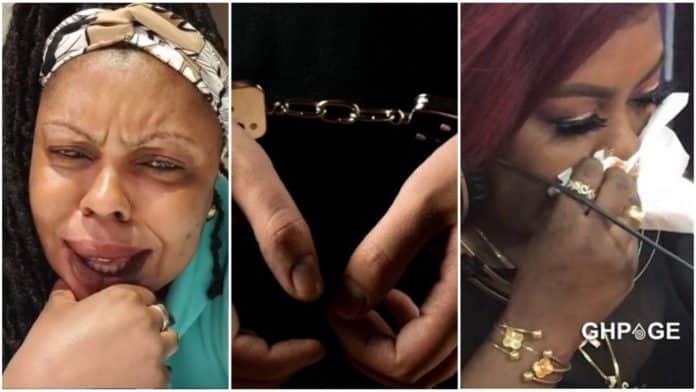 Loudmouth Ghanaian socialite and actress, Afia Schwar was reportedly arrested yesterday evening and locked up in police cells at the Cantonments Police Station with reference to a certified report Sradio5.com has on its desks.

According to reports that we have attained from a very genuine source, Afia Schwar who is noted and famed for insulting and threatening anyone she has an internet brawl with was taken to court this morning and granted self recognize bail because the judge who was to preside over the case was not available.

Afia Schwar’s infamous arrest was influenced by her extreme insults on Asantes during her beef with respected Mercy Aseidu who was respectfully minding her business until Afia threw the first blow.

Former Presidential staffer under the else while John Mahama administration who broke the news on social media wrote:

“AFIA SHWERZENEGER WAS ARRESTED AND LOCKED UP IN POLICE CELLS AT THE CANTONMENT POLICE STATION. TWO DAYS AGO.SHE HAS BEEN CHARGED WITH OFFENSIVE CONDUCT AND WAS GRANTED BAIL YESTERDAY.”

It can also be recalled that two days after insulting Mercy Aseidu and Asantes over the controversial “winter jacket”.

Narcissistic Afia Schwar who gullibly believes that she’s above the law dropped a self-made video on the internet swearing to hire thugs to beat Mercy Aseidu and also shoot her.

Rude and discourteous Afia Schwar is trying her possible best to shield her arrest saga from the public domain but we at Sradio5.com

with eagle eyes have uncovered her ill-famed encounter with the Ghana Police Service and the law.

Stay tuned for more on this story!