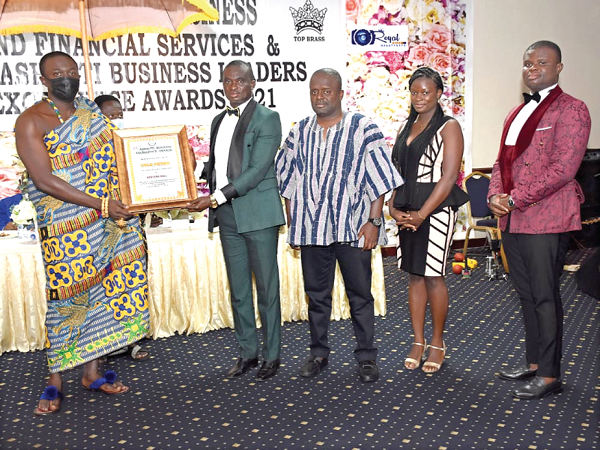 Thirty individuals and corporate organisations have been recognised for their contribution to the development and expansion of the economy of the Ashanti Region at the 18th Ashanti Business and Financial Services Excellence Awards held at the Golden Tulip in Kumasi.

The awards were organised under the auspices of the Manhyia Palace in Kumasi.

They included the SIC Life Insurance Company, the Social Security and National Insurance Trust (SSNIT), the Access bank, an IT company NIIT and the Atwina Nwabiagya Rural Bank

Others are the Western Mall in Bantama, Kumasi, and a recreational centre, Rattray Park, among other winners .

Both the mall and the rattray are owned by a local businessman, Mr Isaac Owusu, who was also given a special mention for opening a new business each year.

The mall won Gold in recognition of its outstanding contribution to the economic development of the Ashanti Region in the category of Supermarket Services, while Rattray Park received the Silver Award in the tourism category.

Rattray was born in India of Scottish parents in 1881.

He was a barrister and held a diploma in Anthropology from Oxford.

He was an early Africanist and student of the Ashanti.

He was one of the early writers on Oware, and on Ashanti gold weights.

In 1906 he joined the Gold Coast Customs Service and in 1911 he became the assistant District Commissioner at Ejura.

Learning local languages, he was appointed head of the Anthropological Department of Asante in 1921 and retired in 1930.

In a speech read on his behalf, the Asantehene, Otumfuo Osei Tutu II, assured local businesses of Manhyia Palace of plans to facilitate the growth of businesses, especially those in the metropolis.

He said the region was well endowed with natural resources and urged budding entrepreneurs to venture into adding value to them.

The message sent through his representative at the ceremony, Nana Agyekum Kusi Ababio, who is also the Oyokohene, said the palace was ready to support businesses to remain afloat and competitive.

For his part, the Ashanti Regional Minister, Mr Simon Osei-Mensah, said the government had created the enabling environment for local businesses to grow; he, therefore, encouraged them to take full advantage of it.

In a response, Mr Owusu implored the government to streamline activities leading to the registration of private businesses and to promote entrepreneurship.

He told the Daily Graphic that the Ashanti Region was the best place to promote entrepreneurship since most people prefer private businesses to public sector work.