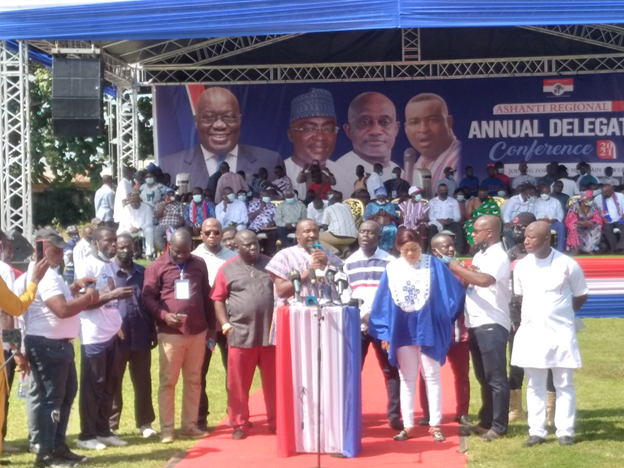 The chances of the governing New Patriotic Party (NPP) winning the 2024 general elections is largely dependent on contesting with a united front, some leading members of the party have emphasized.

Speaking at the Ashanti Regional Delegates’ Conference of the NPP at Akyawkrom near Ejisi in Ashanti on Wednesday (October 27, 2021), the speakers expressed the belief that the party remains the best choice for Ghanaians based on its track record, but any internal wrangling ahead of the elections could hurt the party’s quest to win three consecutive elections for the first time under the Fourth Republic.

Various speakers at the conference underlined the need for members to work towards party unity, so as to be able to maintain power to continue to improve the lives of the good people of Ghana.

They particularly, spoke against character assassination as various aspirants for executive positions laced their boots for the internal contests.

The Ashanti Regional Chairman of the NPP, Mr. Bernard Antwi Boasiako said contestants must not see opponents as enemies, because they were all seeking to serve the same party.

He entreated all contestants to be decorous in their campaigns by telling the delegates what they could do to improve the fortunes of the party rather than attacking fellow contestants.

“This is an internal contest and I believe we all mean well for the party, so let us desist from attacking our opponents in the interest of party unity,” Mr. Antwi Boasiako advised.

The Ashanti Regional Minister, Mr. Simon Osei-Mensah also stressed the need to unite the party from the grass root to the national level.

He said much as the NPP stood a better chance of winning the 2024 elections, the party needed to work hard to unite all factions and address the grievances of the grass roots to secure a resounding victory.

“Let us make sure resources are equitably distributed especially to the grass root, which is the base of the party to be energized for the task ahead,” the Regional Minister suggested.

He also spoke of the need to put together strong communication teams to propagate the impact of all the good policies being implemented by the government.

The General Secretary of the NPP, Mr. John Boadu called for renewed efforts from members of the party at all levels to prosecute a good campaign to retain power.

He urged them to take active part in the membership drive currently ongoing at the polling station level, saying it was the first step towards winning the next election.