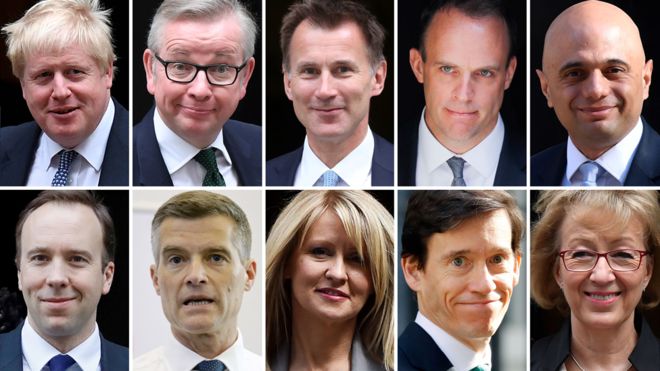 Conservative MPs have begun voting for their new leader and next prime minister in the party’s first ballot in Parliament.

Voting is taking place by secret ballot in the Commons, with a result expected some time after 13:00 BST.

Any of the 10 candidates who fails to secure at least 17 votes will be eliminated from the contest.

Further ballots will be held next week, with the two most popular MPs moving to a run-off of Tory party members.

The winner of the contest to succeed Theresa May is expected to be announced in the week of 22 July.

Boris Johnson – who launched his leadership campaign on Wednesday – is regarded as the frontrunner in the contest, with many more public endorsements from MPs than any of his rivals.

In his pitch to MPs, the former foreign secretary pledged to take Britain out of the EU by the end of October. He gave little detail of his plan but stressed it was not his aim to leave without a deal.

He also defended what he called his straight-talking style, saying the public wanted to hear what politicians genuinely thought. But he dodged questions on whether he had ever taken cocaine.

“We need tomorrow’s leader, today,” he said. “Not the same old insiders with the same old school ties – but a new generation, with a new agenda.”

Mr Javid told BBC Radio 4’s Today programme he wanted to leave the EU with a deal, but would choose no deal over no Brexit.

He said there needed to be changes to the controversial Irish backstop – designed to avoid a hard border on the island of Ireland – of either a time limit “or some proper exit clause” and UK government should offer to pay for any “alternative arrangements” for the border.

Mr Javid, Michael Gove, Dominic Raab and Jeremy Hunt have all received enough public endorsements to suggest they will make it through to the next round.

The remaining five candidates – Matt Hancock, Rory Stewart, Andrea Leadsom, Mark Harper and Esther McVey – are hoping to make it through and to build momentum.